Let me go on record as saying I love creepy kid movies. This is a horror sub-genre that I will probably always buy into. I have watched “The Daisy Chain” a couple of times. And I really like it. This may be because it overlaps the creepy kid genre and magical/fantasy genre, (or does it??) which I also LOVE.

The movie is about a married couple, Tomas and Martha. They escape the bustling city of London for the quiet, coastal town of Tomas’ youth. Martha is pregnant and still grieving for their infant daughter who died not long after birth. They have neighbors in the new home. And not exactly normal neighbors either. On one side, there is the little Gahan family. Mom, dad, a toddler boy, and their little girl Daisy. Daisy appears to be autistic and takes a liking to Martha. The other neighbor is grumpy ole’ Sean Cryan. Sean is superstitious, religious, and likes to throw rocks at Daisy. Oddly, her mother and father seem burdened by her as well. Not long after, the Gahan’s lose their little boy to him drowning. But how did he wander out of the yard and into the ocean? The family usually keeps him tethered to a rope which is attached to a stick in the Earth. Granted, that seems like a fool-proof plan for child safety if ever I heard one! Then, the Gahan’s house catches fire. Both mom and dad die, leaving Daisy to be rescued by Martha. Cause of the fire? You guessed it. Arson. A cop on the scene talks to Daisy  and agrees that she will stay with Tomas and Martha until social services works out a home for her. Hmmm…the plot thickens.

To keep it simple, weird stuff happens around Daisy. People get hurt, or even die. And the only person she really seems to get along with at all is Martha. Martha becomes kinda obsessed with Daisy and fights to keep her in their custody. Tomas seems pretty creeped out by Daisy. And a toll is taken on their marriage. But he is reluctant to join in the angry mob of Sean Cryan, and the townsfolk who believe that Daisy’s “bad luck” is actually more…magical. You see, they think she is a fairy changeling. For those who are not aware, changelings in myth are basically the children of magical creatures who are switched out by their parents for human children. They generally cause problems, murder and mayhem for the humans around them.

You probably see where this is going by now. Now, here is the tricky part of the whole story. This is a spoiler-ish part, so maybe watch the movie and come back before reading on if you are so inclined. And I hope you are inclined! 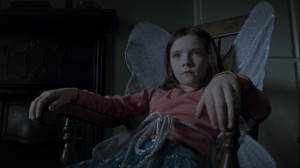 Is it socially acceptable for adults to wear wings?

Okay, you’ve been warned. Daisy’s slightly odd behavior and mannerism are consistent with some autistic children. In fact, you could make the argument that there is nothing magical about Daisy at all. And yet, there is also the evidence to support she IS a fairy changeling desperate to be the only one in Martha’s life. I love that about this movie! It’s not all laid out and obvious, but it’s also not so vague you can’t draw any conclusions. Personally, I choose to believe the fairy theory. I am a proud fairy and magical creature enthusiasts. So for that reason and the fact that Daisy is actually pretty creepy, I recommend this movie. Highly. Oh, but if you’re sensitive to and/or easily offended by bad stuff happening to pregnant ladies and children this movie may not be your jam.

What do YOU think? Cancel reply