You may have read my review of Insidious Part 1 wherein I unabashedly share how much I love that movie. Not surprisingly, I had huge expectations for Chapter 2. Though it didn’t make my heart sing like its predecessor, the sequel was fantastic. James Wan and Leigh Whannel obviously took a lot of pride and care in crafting another excellent horror movie for us fans.

The film starts off immediately after the first chapter ends. Meaning all the actors/character we know and love are back. Impressively, the two little boys look exactly the same as they did in the first go around. Obviously, time was of the essence in making this movie. We all know I was happy to see the familiar faces especially Barbara Hershey (I’m thinking of being her when I grow up.) Sorry if you haven’t seen this first one yet, but the trailers make it obvious that the spirit realm isn’t done with the Lambert family. In fact, when dad Josh (Patrick Wilson) returned from “the further” to rescue son Dalton (Ty Simpkins), he brought SOMETHING eviiiiiil back with him. That’s the basic plot.  Please consider yourself  **SPOILER** warned from this point on. And what the hell is wrong with you if you haven’t seen these movies yet? Get on it! :p

Let me run down the stuff I loved about this one. I like doing this in bullet points for those of us with short attention spans:

Okay, I had one big gripe with the movie. Really, this is the only thing that irked me.

Well, that’s it! I hope you guys liked Chapter 2 as much as I did. I got some feedback to grade/rate movies. Until I figure out a system I like more, I’m going to go with the standard A+ through F system. 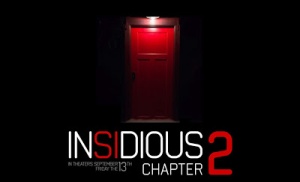